Lessons Learned From My Father, Miles Lord: All Things Are PossibleOct. 3, 2017 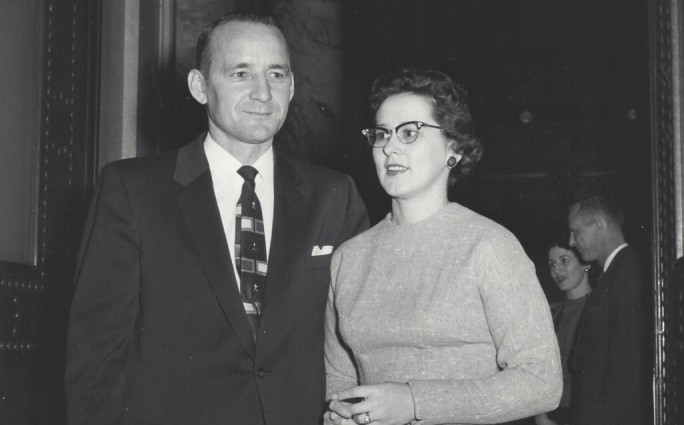 Growing up with Miles, we kids noticed that, unlike us, he had boundless energy and did not need much sleep. Behind his back we would call him the "whirling dervish." He really believed that he could do just about anything and everything if he just put his mind to it and he taught us that we could do the same. He would try to inspire us by telling us to "hitch your wagon to a star."

Occasionally Miles would read a book, but mostly he chose to busy himself by tinkering with things to make them better. The Christmas holidays were a great time for Miles to tinker. Every Christmas our family bought a pine Christmas tree and some extra boughs. The first thing Miles would do was to take the tree to the basement, cut off some of the branches, drill various holes in the trunk and add the branches he had removed along with the newly purchased branches to fill out any bare spots or holes. In effect, he was creating his own Christmas tree.

Our Mother, Maxine, never appreciated altered Christmas trees and she would object strenuously. One year in about 1957, he went a little too far and cut off all the branches of that year's tree except for the top three branches. Then he drilled new holes and inserted the cut branches into the new holes. When finished, he proudly brought the tree up from the basement into the living room and put it in its stand to sit overnight so we could decorate it the next day. When we woke up in the morning, all but the top three branches had fallen to the floor. It looked like a palm tree. We kids giggled and knew Dad was gonna get it from Maxine. Our mother was so mad she picked up the tree and threw it out in the snow. From that time forward she put her foot down and would only buy a white flocked tree which she knew Miles could not alter.

Another time, my sister Virginia's little yellow Datsun developed a plate size hole in the floor under the brake and gas pedal. Rather than replace the car, Miles took "Dotty" into his garage, turned it on its side and spent two months welding the underside. It was drivable for another couple of years.

In the early, cooler Spring of the late 1970s, Miles wanted the little grandchildren to be able to play in the sand by the lake. He took a culvert type pipe, dug it under the sand and then started a campfire at the open end of the pipe heating it so that the sand would warm as the little ones played in the sand wearing their snow suits.

Without ever taking a cooking lesson from his mother or my mother, Miles thought cooking was a snap. One summer in the late 1950's Miles found a very large turtle near the lake. It occurred to him that the family would enjoy turtle soup. He caught the turtle and put the whole thing (including its shell) into boiling water and cooked it all day. When he served it at dinner we all took a taste and left the table. The smell and the taste of that whole turtle were horrid. He hadn't even added salt.

LESSON LEARNED: Reach for the stars, but know your limits.