Help Stop our Administration’s Policy of Separating Families at the Border Jun. 19, 2018 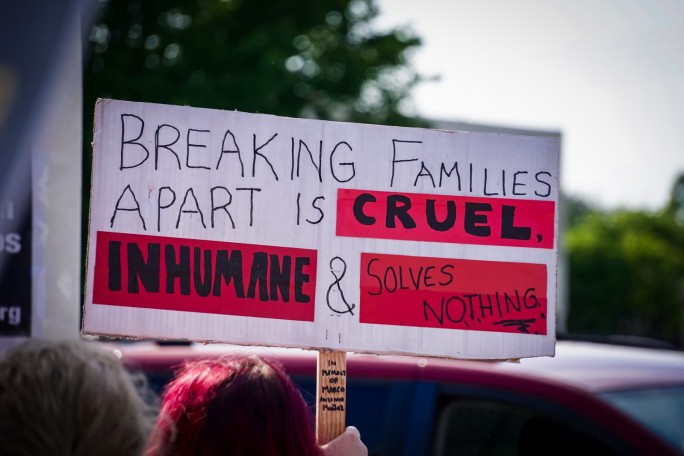 Since April 19, 2018, the current administration has been forcibly removing children from their parents when they apply for asylum at Mexican border ports of entry. This is a part of the administration's "zero tolerance" immigration policy. There have been reports that while the parents are being processed, border patrol officers lie to parents, telling them that they are taking their children to be bathed or photographed. It is not until their children are not returned to them for hours that the horrifying reality hits these parents; their children have been kidnapped, stolen from them by Immigration and Customs Enforcement.

When these children are taken from their parents, some little ones scream for their parents hysterically for hours; even infants are being taken despite still needing to be breast-fed by their mothers. The attachment losses and PTSD for these kids is profound. This morning, National Public Radio (npr.org) reported that migrants are being stopped at some ports of entry before they even reach U.S. soil and are told they must go home without having the opportunity to make a plea for asylum. In light of what is happening to asylum-seekers' children if they do make it to the United States, they unfortunately may be the lucky ones.

Additionally, once our government takes these children from their parents, the tracking systems are limited or non-existent. This lack of tracking could make it nearly impossible for many parents of these young non-English speaking children to ever find their child. Many children are being held in cage-like enclosures while their parents are deported, leaving these little ones here on their own. White House Chief of Staff John Kelly casually stated to NPR, "the children will be taken care of – put into foster care or whatever." One can only imagine the "whatever."

It has always been legal for a non-citizen to seek asylum in the United States if fearing for their lives due to threats of deadly gang violence or spousal abuse. Upon arrival at the United States border, all an asylum-seeker needed to do was announce to a border patrol officer that they were here seeking asylum. At that point the asylum immigration process began with the asylum-seekers filling out an application for asylum, Then the applicant would be interviewed at an immigration office along with their children and spouse, where they would wait together as a family for a decision as to whether their application was accepted. Prior to April 19, 2018, the families were always kept together.

However, since April 19, 2018, as a result of their "zero tolerance" immigration policy, President Trump and Attorney General Sessions turned these desperate asylum seekers into criminals. They made a unilateral decision, without any approval from Congress, that the United States will no longer consider fear of deadly gangs or spousal abuse to be sufficient reasons to qualify for asylum. As a result, as soon as a family comes to the border patrol and announces they are seeking asylum, they are arrested as criminals and their children are ripped from their arms.

On June 1, 2018, the Department of Homeland Security officials reported that approximately 50 children per day are being removed from the safe keeping of their parents since April 19th. At the end of May it was estimated that over 2,000 children had been taken from their parents.
President Trump justifies removing children from parents because of "bad legislation" passed by the Democrats. But this is not true, as there is no law that requires immigrant families to be separated. However, the real motive was revealed in one of his latest tweets, "Put pressure on the Democrats to end the horrible law that separates children from their parents once they cross the border...we MUST continue building the WALL!" This is akin to kidnapping where the ransom is the wall.

So, the message from President Trump is, "Give me the wall and I will quit taking children from their parents." This begs the question, who rips children away from their parents in exchange for a border wall? For these parents, having a child taken away and not knowing their place or welfare is profoundly disturbing. Is this the United States of America we know and love? Those who are making these decisions claim to be aware of the trauma this causes innocent children and their parents, but their actions demonstrate a lack of compassion and willingness to stop it. Even President Trump calls it "terrible." This policy is more than terrible, it is despicable and we need to stand up to this incredible abuse of children. What will President Trump do next if he can't get his wall? This country was founded by people seeking asylum from religious persecution and government tyranny and this policy goes against the very fabric of our country and who we are as a society.

WE CAN DO SOMETHING: Congress will be voting on a new immigration bill this week. If you are outraged by this separation of children from their parents at our borders, speak out now before further irreparable harm happens. This is not a matter of being Republican or Democrat. This is a matter of human rights. No matter your party affiliation, please call your elected officials and demand they stop this abuse and get these children reunited with their parents immediately. Follow this link to contact your elected officials and the White house: www.usa.gov/elected-officials/. EVERY CALL MATTERS!

Click here for a list of organizations that are working to assist these families on the ground.

Additionally, a national day of action is to occur on June 30th and is organized under the hashtag #FamiliesBelongTogether,