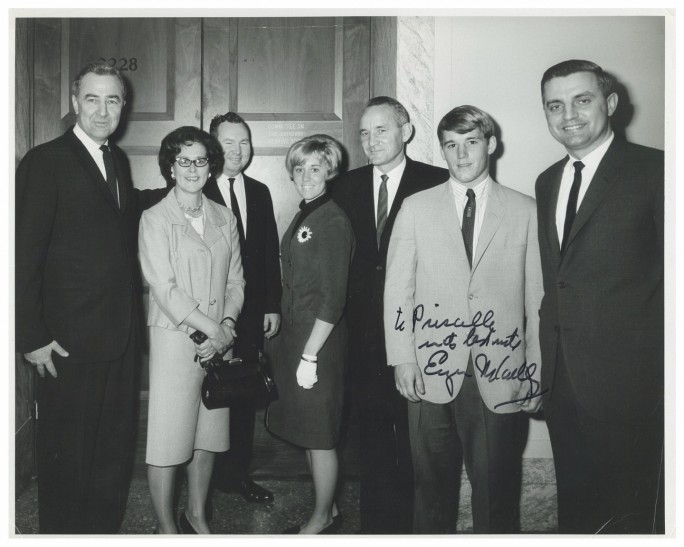 Why Vice President Walter Mondale was such a great Minnesota role model.

Mondale was committed to making life better for "The little "Gal" and "Guy."

I first met Walter Mondale in 1958 when I was 16 and he worked for my father, Miles Lord, who at that time was the Minnesota Attorney General. In the late 50's Miles, Walter Mondale, Hubert Humphrey, Eugene McCarthy, Art Naftalin and Orville Freeman were a team of men who each felt the calling to contribute to the betterment of the lives of Minnesotans by pursuing a life in politics. Their goal was to put together a political plan they believed would be the most supportive of good social policies in order to create a more equitable state for all Minnesotans.
In 1960, when Miles decided to retire from politics at the urging of my mother, Maxine, he said he "hatched a plot" to get Walter Mondale appointed as his successor. The "plot" worked. Walter Mondale was appointed Attorney General in 1960 by Governor Orville Freeman which ultimately led to a long life of political leadership. In 1964, after Minnesota U.S. Senator Hubert H. Humphrey was chosen to run as Vice President with President Lyndon Johnson, Minnesota Governor Karl Rolvaag appointed Walter Mondale to take Senator Humphrey's U.S. Senate seat.
Mondale kept his promises.

As planned, Senator Mondale worked to make life better for the average U.S. citizen while serving in the U.S. Senate, like voting for desegregation of schools, fair housing, and tax reform. In 1976 he was chosen by Democrat Jimmy Carter as his running mate for the presidency and together they beat Republican candidates Gerald Ford and Bob Dole. However, in 1980, Walter Mondale and Jimmy Carter were beaten by Republican candidates Ronald Reagan and George H.S. Bush.
Mondale was courageous.

In 1984, Vice President Mondale was chosen as the Democratic Presidential nominee and made the unprecedented decision of choosing a woman, Geraldine Ferraro, to be his running mate. As we know, this didn't happen again until 36 years later when Joe Biden chose Kamala Harris to be his running mate in 2020. Unfortunately, Mondale and Ferraro lost the 1984 election to Regan and Bush.

Mondale was willing to sacrifice for the better good.

The biggest sacrifice he made was in 2002, when just 11 days before the 2002 election, Minnesota's beloved U.S. Senator Paul Wellstone, who was running for re-election, was killed in an airplane crash. At the age of 74, Mondale took up the burden of replacing Wellstone in the race. Disappointed, he lost the election to Norm Coleman by just 2.2% of the vote.

Mondale was always loyal, respectful and compassionate to those he met and worked with.
Besides being a great politician to the nation, Mondale maintained a loyal friendship with our family. He came to all our family weddings and funerals. He had the reputation of being kindat and respectful to everyone he met. He was rarely insulting or nasty to his opponents. He was principled. He was not guided by the popular stance at the time, but rather by his deep beliefs in fairness. He stayed engaged right up to the end of his life at the age of 94.

What a great role model for us all!!! Rest In Peace, Mr. Vice President Mondale.