Lessons Learned From My Father, Miles Lord: Courage to Take a StandApr. 16, 2018 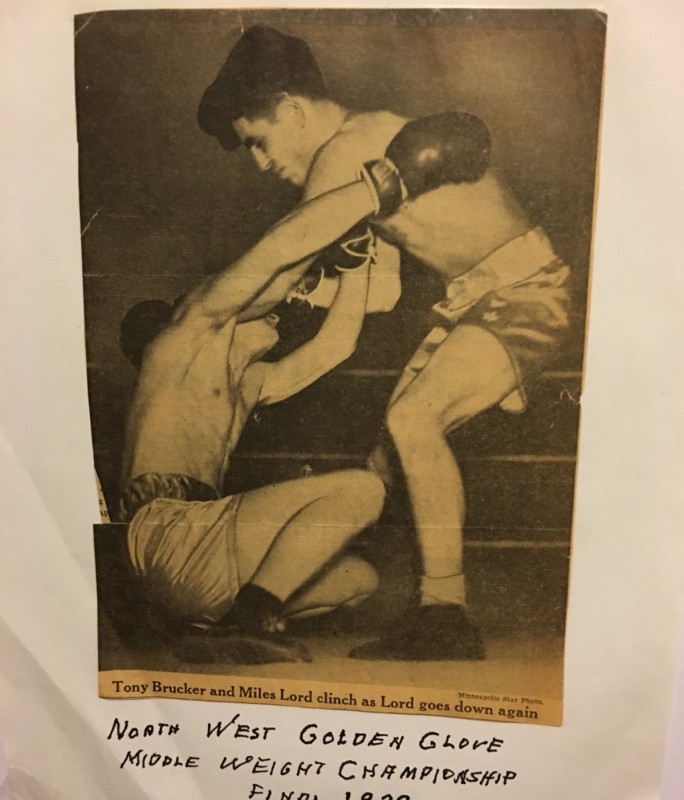 It took a lot of courage throughout his life and career for Miles to stand up to some pretty powerful people and organizations. In many ways, he had been training for his future career as a federal judge ever since he was a young boxer in northern Minnesota. As a golden gloves champion, he learned to have the courage to fight: he would get knocked down and come right back up and start all over again. He was not afraid of his opponent, no matter how formidable.

For instance, he halted Reserve Mining Company from dumping cancer causing asbestos-like tailings in Lake Superior, despite this being highly controversial; no one had ever ordered a corporation to stop its operations before the closing of a case before. He also personally verbally reprimanded the executives that sold the Dalkon Shield intrauterine birth control device while knowing they were selling a product that caused severe infections and even death during a time when judges never took to task publicly chastising corporate wrong-doers. Miles also took on the original board of the beloved Sister Kenny Institute for stealing millions of dollars from the non-profit, which was very unpopular at the time.

Sometimes he made mistakes. Later he would share with me that he regretted a few decisions. One was a case where a female plaintiff had filed a case of gender discrimination. He ruled against her. But later, as the Women's Movement came alive, he became conscious of how women were discriminated against based on their sex, and he came to regret the ruling he had made against that woman. Prior to the onset of the Women's Movement, it never occurred to him that life could or should be different for women. It also did not hurt to have his two daughters remind him daily of the inequities that persisted against women.

Sometimes my father's courage made people angry. As a result of Miles' varied careers, he developed some serious enemies. When he was U.S. Attorney in the late fifties, he prosecuted Benjamin Dranow, an associate of the famous gangster Jimmy Hoffa. When I was twelve years old, my father was Minnesota's Attorney General and he was prosecuting some local gangsters like Kid Cann and Tommy Banks. I remember one Sunday afternoon my parents went out for a drive and I was left in charge of my three siblings: Virginia 4, Jim 6, and Mick 8. While my parents were gone the phone rang and when I answered it I heard the voice of a man I did not recognize. The man told me to tell my dad that, "if he knows what's good for him, he will lay off Tommy Banks." For me that was a terrifying call. I was so scared for the safety of my father that I could not hold back the tears when I told my parents about it when they returned home. Miles may have been scared, but my father showed no signs of concern. However, I learned later that the threat moved him to buy a handgun for protection.

In 1966, soon after Miles became a Federal Judge, he was again presiding over a case that had to do with the prosecution of some gangsters. For about ten days, wherever I went, I was accompanied by Secret Service men who were hired to protect me and the other members of our family. Miles would never tell us what was happening in a case and I never was told why the Secret Service were escorting me around, but I understood that it was a result of another threat on the life of a family member.

Miles persevered, but I realized later in life that he continued to be very concerned for his own safety and the safety of his family. I know the threats made against him bothered my father, but he never let on that he was frightened and that was good, because if he was not afraid, we children felt there was nothing to worry about.

Miles' courage was controversial. In public, Miles may have acted as though he did not care what people thought of him, but at home he shared with us that the criticism he received for some of the decisions he made, weighed on him. He was sad and mad that the judges on the Eighth Circuit overturned his decision to force Reserve Mining to stop dumping asbestos-like tailings into Lake Superior. He became very irritated when the Eighth Circuit judges criticized him for taking the manufacturers of the Dalkon Shield to task for hiding evidence of their wrongdoing.

I think a lot of Miles' courage originated with his boxing career as a young man. Just like in his boxing days, my father spent a lot of his career getting knocked down, coming back up and starting all over again.

LESSON LEARNED: Have the courage to do the right thing, despite being afraid or concerned with what other people think of you. In the end, be resilient and you will be respected for sticking with your values.