Lessons Learned From My Father, Miles Lord: How to Be a PranksterOct. 31, 2017

Miles always had a lot of fun. Although he was a very hard worker and taskmaster, he loved to play. Those who worked for him said that when he would give them work to do, he did not stand looking over their shoulder or try to micro-manage their work. He let them go at their own speed, but would be happy to discuss the project at any time in the process. As far as I could tell, most everyone who worked for him genuinely liked him. I would meet many of them at our home as he would bring a few law clerks home for dinner or have parties at home for the people on his staff.

One of his best friends was Hubert Humphrey, senior Minnesota U.S. Senator (1949-1964; 1971-1978), Vice President to President Lyndon Johnson (1965-1969), and subsequently, the loser in the 1968 Presidential election to Richard Nixon. Miles and Hubert met while Miles was in law school and Hubert was the mayor of Minneapolis. They bonded immediately and from that first meeting on, they helped each other out. Miles worked on all of Hubert's campaigns and Hubert helped to appoint Miles as a Federal Judge. Later on, Muriel Humphrey and my mother, Maxine, became good friends. My siblings and I became close friends with the Humphrey children and Nancy Humphrey became one of my best friends.

In the early 1960s, Miles, Hubert and their children (excluding myself and Nancy) went for a fishing trip in the Boundary Waters. While there, a tour bus arrived at the same place that the Lord-Humphrey group was starting their trip. Miles went into the bus and spoke to all the passengers telling them who he was and that there was a man nearby who was impersonating Senator Hubert Humphrey. He advised them to ignore the man calling himself Senator when he got on the bus as he was a little delusional. Of course, when Humphrey got on the bus he introduced himself as himself and the passengers laughed at him and kidded with him telling him they knew he was definitely not who he said he was. One of the passengers said, "If you are Hubert Humphrey, I am Pat Brown (then Governor of California)." Humphrey left the bus and came over to Miles and asked, "Miles, what have you been telling those passengers?" Miles started to laugh, told him the truth and then they all cracked up over the joke. Hubert was always such a good sport.

Miles was a prankster at home too. In my freshman year in college, I brought my roommate and our two "boyfriends" to my family home on Christmas Lake. As the four of us were sitting in the living room visiting on a rather long sofa, from behind us, very quietly, came my father leading a very large horse right through the house! They stepped right over the middle of the sofa between us and walked out the front door, my father not saying a word! Needless to say, we all were in shock. 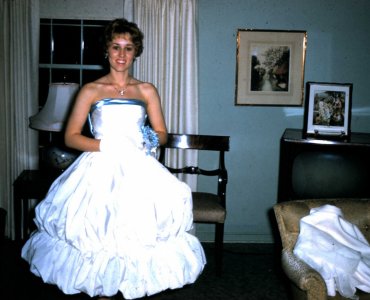 As a teenager, I had several dates with some very nice young men. Not long ago, I was talking with a friend and recalled how while I was upstairs dressing for the date, my dad would always try to be the first to meet my date at the front door. Miles would don his favorite disguise which consisted of wearing a long black shiny wig, and real-looking ugly buck teeth. He would greet each young man, asking the following questions: "What does your father do?" "Are your intentions honorable?" "Let me see your teeth." At which time, he would gaze into their mouth like he was judging a horse. Once the questions were answered, he would then try to wrestle the young man to the floor! When Miles finished with his "interview," he would let me know that my date was waiting. However, one time, I came down early and overheard his unusual interview technique. I was shocked and firmly insisted that he stop his shenanigans. I then realized why none of those dates had come back for a second visit. Whose father does that? Now, I can laugh.

LESSON LEARNED: Enjoy being a prankster, but don't act too outrageous around your children!